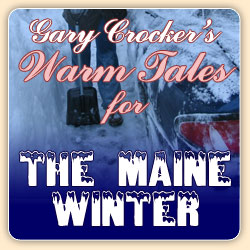 The Cost of Wintah Clothing

A bunch of the early morning get-together-and -chat boys were meeting at 6:30am next to Fullers Market coffee hutch which even has some of those flavored coffees you can find at Daytona Beach or that Napa Valley in California. It was a tad chilly, so we were meeting inside the store rather than leaning on the back of Mert Hickey's Dodge pick-up.

Right in the middle of our chat Velma Cooley came runnin' flappin' her skinny little arms like she was trying to get airborne. In fact, they were flappin' about as fast as her gums as she commenced to explain how cold it was at her place out on the Collins Mills road. Well, we listened to how cold it was milkin' the cows and sloppin' the hogs at 5:30am this time of year and she was already whinning about how bad it will be in February. Finally, Chester had heard enough and stopped her right in her things- are-so-bad-and-not-apt-to-get bettah tracks.

That's when he described the "wintah weight" theory that he and Mavis have always subscribed to. He explains to Velma that the only reason she is cold is that didn't eat enough dough boys and donuts at the Litchfield fair in September. He considered it a wasted effort if he doesn't put on 15 to 20 pounds during the annual agricultural extravaganza! The way he figures it, you can keep warm by simply bulking up in the fall and a secondary benefit is that you can save enough money on heating oil, sweaters and coats that you can buy even more donuts and dough boys at next years fair.

Chester says that he and Mavis have used this approach for years with huge success. And when asked what his cholesterol count was he responded that he never went far enough in school to learn to count that high. Then Chester sat down, took a deep breath and asked someone to open the door so he could get some air.

White out Driving Tip for Wintah

The other day me and Wilbur got to talkin' about how wintah is right around the corner and we better get ready for it. We've had a couple of mild ones and according to Wilbur there's not much chance our luck will continue to hold. So, he stocked up on tire chains, one of them-start-no-matter-what-the-temperature is, batteries from See-ahs, lots of anti-freeze, extra gloves, some sweaters and Charhart jeans. But the most important thing he has in his winter arsenal is tips on driving in white out conditions which he got from Mert Webstah over in Coopers Mills.

Well, I looked into it myself and followed Mert's advice during the one set on white out conditions we had last winter. I did exactly what Mert recommended - I couldn't see anything except pure white snow thru my truck's windshield so I got directly behind one of them big orange plow trucks with the flashing lights on the back. I couldn't see much except the glow of those lights thru the driving snow so I stayed right close and when he turned left I turned left and when he turned right I turned right. The only safe place was directly behind that big plow truck. So every time he turned I turned and after two hours of tight turns he stopped his truck right in the middle of the road, got out, and walked back to my car. It was still snowin wicked hard so I rolled the window down just a tad so I could hear what he was yellin at me.

He said, "I noticed you been following me for two hours."

"Yup," I said . "Safety first. I want to get home safe tonight and the safest place to be is right behind a plow truck with bright orange lights I can see through the blowin snow."

"I understand", he yells, over the blowing snow and his deisel engine- "but I just wanted you to know- I'm all done plowin the Kmart yard and I'm headin over to the Walmart."