These are messages of thanks from Gary's clients. Please contact Ellen, Gary's wife and manager, if you would like to share your company's enjoyment of Gary Crocker, Maine Humorist. 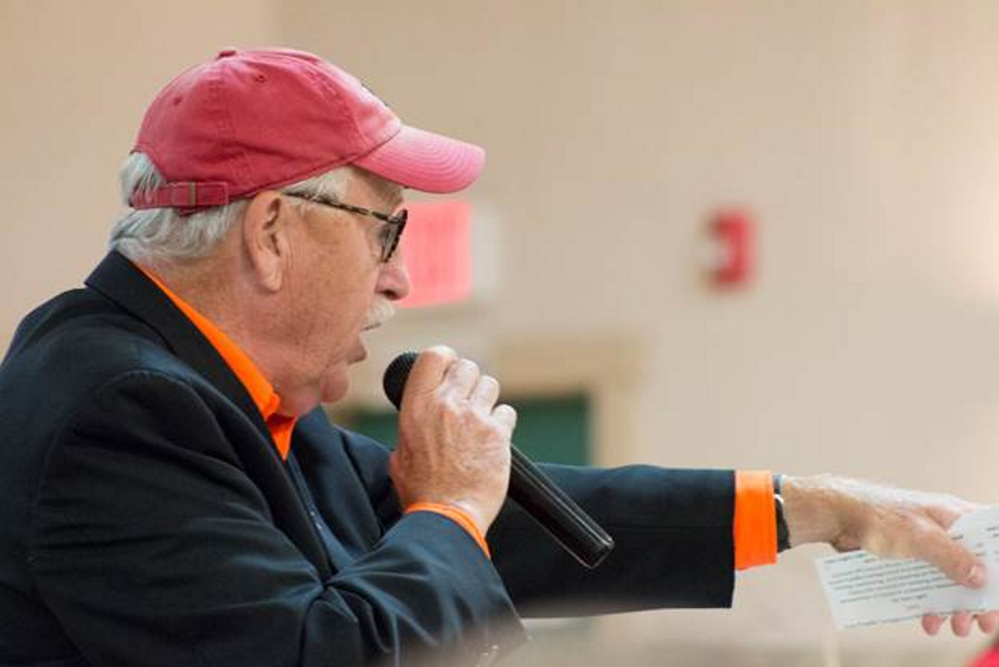 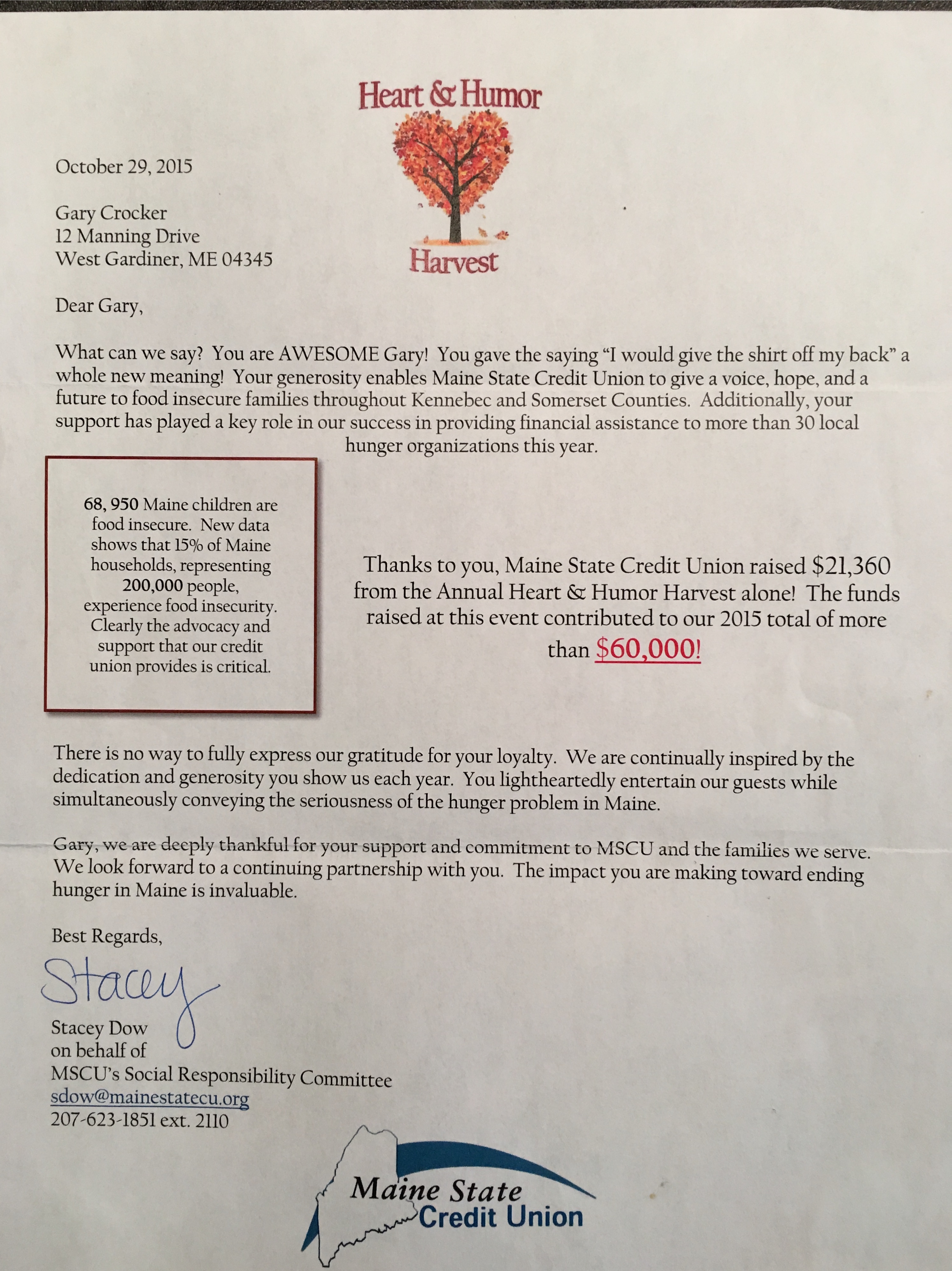 View the letter from MSCU

What can we say? You are AWESOME Gary! You gave the saying "I would give the shirt off my back" a whole new meaning! Your generosity enables Maine State Credit Union to give a voice, hope, and a future to food insecure families throughout Kennebec and Somerset Counties. Additionally, your support has played a key role in our success in providing financial assistance to more than 30 local hunger organizations this year.

Thanks to you, Maine State Credit Union raised $21,360 from the Annual Heart & Humor Harvest alone! The funds raised at this event contributed to our 2015 total of more than $60,000!

There is no way to fully express our gratitude for your loyalty. We are continually inspired by the dedication and generosity you show us each year. You lightheartedly entertain our guests while simultaneously conveying the seriousness of the hunger problem in Maine.

Gary, we are deeply thankful for your support and commitment to MSCU and the families we serve. We look forward to a continuing partnership with you. The impact you are making toward ending hunger in Maine is invaluable.

Appreciation from Maine Agri Women in 2015

American Agri Women celebrated their 40th anniversary in Portland Maine and were very happy that you were a part of it. We were so glad that you were available to entertain our Ag women from all over the United States.

Gary you were right on, energetic on entertaining everyone, we only heard great comments from every one. We enjoyed your comedy immensely and your auction talents are fantastic.

Appreciation from Southworth International Group in 2015

Southworth International Group
Hello Gary...and a WICKED BIG Thank You from all of us at Southworth,

Celebrating our 125th anniversary has been a year-long program primarily focused on giving back to the communities that have supported us throughout our history. When we began planning for our big anniversary, it was our employees who chose to be fantastic citizens. So we wanted to be sure that they enjoyed a great party as a gesture of our pride and appreciation for all that they have done. We also wanted utilize the party to share our past and present story with local leaders, past employees, suppliers and families in hopes that they would better understand our culture and values.

With over 200 people gathered under that tent, the camaraderie was exceptional...the food and beverage were excellent...the music was perfect...the memory videos were great fun...but it was that damn hilarious story teller who made the evening...Thank you for taking the preparation time to investigate our history and learn a little about us before the event...Weaving our story and people into those local tales elevated everyone's enjoyment to the highest level...I'm sure a few of the folks would go out and purchase some of that "depend underwear" if we had you again...and I can't wait until we come up with a reason to do so!

Appreciation from Pineland Farms in 2014

On behalf of the V.A.S.T. Program and Team Semper Fi, please accept our sincere appreciation for your willingness to be with us during our Pot Luck Dinner on Sunday night. Your sense of humor was both unique and highly entertaining! I can assure you that seeing our participants laugh was one of the highlights of our weekend.

I also think the lessons behind your stories were spot on. As you know, each of our guests was dealing with physical and personal issues. Your efforts have helped them in no small way.

Our veterans have given their all for this Country and they deserve the chance to heal. You should know that you have played a part in this.

January 11, 2007 - Employee Recognition Dinner
"...There is still a buzz going around the mill... Your ability to customize to the audience and for the occasion is incredible. You were clearly the hit of the evening..."
Read the entire testimonial from Verso Paper

December 2, 2006 - Employee Christmas Party
"...Everyone thoroughly enjoyed the evening. It is rare to hear a performance with such class. We have heard from several employees that they had a great time and loved your performance..."
Read the entire testimonial from Webber Energy Fuels

May 13, 2006 - Maine State Society of Washington Annual Lobster Dinner
"...Your outstanding presentation of genuine Maine humor was both tasteful and hilarious. You are indeed a suberb entertainer..."
Read the entire testimonial from John Reed

Testimonials from 2005 and Previous Public Speaking

November, 2005 - Employee Appreciation Party
"...Your ability to draw the crowd into your comedic performance takes special talent and you sir have just that. Even your Maine humor stroies had a fresh flare such that even the most seasoned, longtime Mainiacs in the bunch couldn't help laughing in the aisles..."
Read the entire testimonial from Pike Industries


Excited by the positive feedback for Gary?

Gary will bring the same energy and humorous talent to your company or organization. Please contact his wife and Manager, Ellen, by phone: (207) 462-3774
by email: humor@garycrocker.com or
by filling out our new Online Request Form