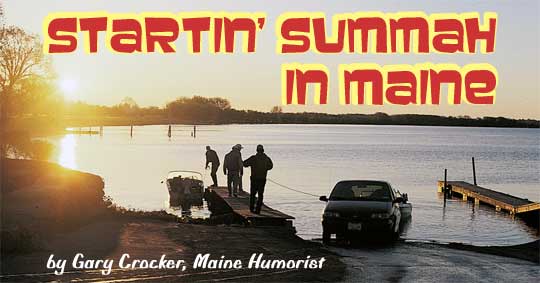 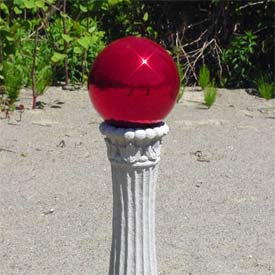 What a gorgeous time of year... when famiingos and tourists flock to the Great State of Maine for the summer festivities. Yup... those familingos add a splash of color to an already gorgeous landscape. It's like when Mutha, a beautiful woman, puts on jewelry- She don't really need it, but if it's just the right color and design it adds that special touch. Kind of like an accent piece. I guess that's what Pink Flamingos and Red Gazing Balls do for the Maine outdoors.

When you put a Red Gazing Ball in the middle of a herd of Pink Flamingos, it's like having a huge kalaidascope on your lawn. I mean, if you get up early enough to catch the first rays of the morning sun coming in over the transfer station and striking that display... It will take your breath away. The only thing that would make it better is to have a fresh donut from Fuller's Market and an ice cold Moxie to wash it down with while you watch the sun rise.

Anyway... I hired Timmy Tripod to come over to the trailer this weekend and bring his laser transit so we could triangulate the perfect placement of the birds and the Gazing Ball. After we got the lawn set up just right, Chester says, "Let's go down to the lake and watchem-lanuchem!"--This is the time of year when cheap entertainment shows up. You know, that one or two Out-of-Staters who finally saved up enough money to buy that big, honking fishing boat they been eyeing for year and they've come to Maine to launch it for the first time.

It can be wicked entertaining, so I says "Let's go, Chester!"

There's a technique to Launchin-Watchin. First, get to the launch site early. Get the high ground so you can see the entire launch site. Light the Hibachi grill, ice down the Moxie... and wait for the fun to begin. Oh yeas, and pick a launch ramp that's steep. It ads to the entertainment value. One more thing,, have a video camera at the ready- you never know when tat special moment will arrive and you will want to re-live it.

Plus... One of the lawyers may be willing to buy the tape for the court proceedings.

The first Launching this year was a humdinger... This fella shows up with a 20 foot fiberglass boat with a trolling motor and a 90-horse Marc hanging off the transom. Something told us this was the one. So we fired up the video camera, flipped the burgers, grabbed a Moxie and settled in for the fun. He pulls in and starts backing his boat and trailer down the ramp toward the lake. Hee hit two or three parked cars before he found the launching ramp, but I'm sure the boys at Fuller's can pound the dents out witha a ball pean hammer. Anyway, he finally backed her down the ramp, put her in park, set the brake and bailed out of her.

He tells his wife to climb into the boat so she'll be in it when it's launched. She climbs in, he unties the safety ropes, gets into the truck and backs down the ramp until the exhaust pipe of his Es-U-Vee is blowing bubbles in the lake. Then he sets the brake again, jumps out races back, unties the boat and sets her free...

She slid into the lake slicker than a bucket of smelts. Which is when the fun began. As the boat floats out into the lake he yells to his wife to use the baddle to bring the boat to shore, so he can get in. What paddle, she asks? Which is when he realizes it's in the back seat of his truck. As he is digging the paddle out of the truck, she says, "How come there's so much water coming in around my feet?" Which is when he spots the stern plug laying net to the paddle.

This week's project is getting that boat off the bottom of the lake and finding a good counselor for thaqt fella and his wife to see if we can't save their marriage.