Well, we had another issue this week in West Gardiner. Actually - it was two West Gardiner boys who went up to Patten to try their hand at Moose hunting. Snapper and Eugene had their names drawn in the moose lottery and just couldn't wait to match wits with that genius of the North Woods - the Grand and Glorious, Bull Moose. 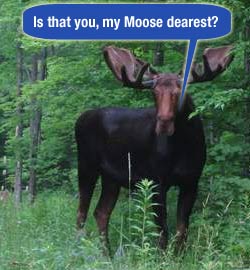 Most hunters track the moose and stake out a piece of ground where they believe moose are likely to be present. Snapper and Eugene had a better idea - they went to a local costume shop, rented a female moose costume, and bought some genuine moose scent at L.L. Beans. They would sprinkle this scent on the costume as they walked through the woods around Patten, hoping to surprise a big bull Moose with Romance on it's mind.

Eugene took the front position and Snapper took up the rear- which - if you knew Snapper like I do - is entirely appropriate. Bent over like he was, Eugene started grunting and groaning - sounding "very similar to a cow moose in heat," according to the local warden. It didn't take long for Snapper and Eugene to draw a crowd of Bull Moose, for starters. A truck-load of hunters heard Eugene bellowing and tracked them down in no time.

Just as one of the hunters was drawing a bead on our heroes, a huge Bull Moose came snorting and thrashing through the underbrush and headed straight for Snapper. As luck would have it those hunters saw the huge Bull Moose just before they pulled the trigger on Snapper and Eugene. The rack on that Moose was tearing limbs off trees as he raced toward our boys. Luckily, the lead hunter dropped that Bull Moose twenty feet before he reached his goal.

When Snapper and Eugene realized what had happened they climbed out of that moose suit and torched it on the spot. Once again, no one was injured; but Snapper and Eugene still get a little jumpy when someone in a big truck blows an air horn right behind them. It sounds a lot like a charging Bull Moose.