This story was first performed for Gary's wonderful listeners on Monday morning, March 29, 2004. When can I listen to Gary's radio broadcasts?

-First, no one was seriously injured or killed as a reult of our weekend adventure- 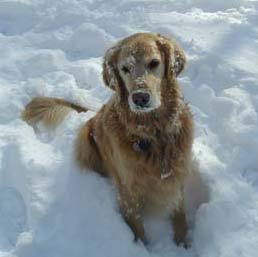 Out here in West Gardiner, as you may know, we like to get a healthy jump on the fishing and hunting seasons. Before the woods, fields, lakes and streams are overrun with law-abiding citizens from places like Manchester, Farmingdale, Litchfield, or even Gardiner proper. Well, me and a few members of the West Gardiner Brain Trust (no names will be mentioned) came down with a massive dose of cabin fever, and one of the fella's says, "Let's find some open water and launch my bass boat!"

Since our favorite lake was still weeks away from a full thaw, we loaded three pickup trucks with fishing gear, guns and dynamite, hooked onto his bass boat, and headed for the lake. We drove out onto the ice, dug out the dynamite, and went to work.

We planned to use this dynamite to create the open water necessary to launch the boat. One of the eager fellas lit a stick of dynamite and flung it as far from us as he could. What a great throwing arm- it travelled quite a distance. The only trouble was, another fella had his mind on some bird hunting, and sitting in his truck was his golden retriever (note the species name). That dog burst out of the truck- tracked the stick of dynamite down and brought it right back to tha very fella who threw it! He dropped it, sparks and all, at our feet and it rolled right under the trucks. I've never seen grown men without ice skates move so fast on ice in my life. We were all a safe distance from the trucks when the dynamite exploded. Even the dog! 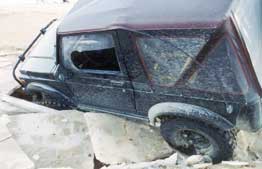 When the dynamite exploded it sent all these trucks to the bottom of the lake. While no one was injured by the blast, the ice cracked open and we were all swimming in the now vast body of open water. The boat, which had been untied from the trailer in preparation for launch, floated nicely on the surface.

We all climbed aboard, pulled the dog in, and dried out as best we could. And you know what?  We decided that after all that trouble we might as well do some fishing. Since the section of open water we had created wasn't large enough for trolling, we decided to use the concussion method- stun the fish using dynamite on the surface.

Luckily, the box of dynamite had been stored in the boat, instead of one of the trucks. But- setting off dynamite blasts that close to the side of the boat turned out to be another bad idea. When the boat sank we all swam to safety and we were pulled out of the water by a warden and some state troopers who had heard the explosions and come out to investigate. The good news is- we all have the same court date, and since we're a little short on vehicles we'll ride out together.

Bring the diverse tradition of Downeast Humor to your next event. Contact Gary's wife and Manager, Ellen, by email: humor@garycrocker.com or by phone: (207) 462-3774 to book an event.